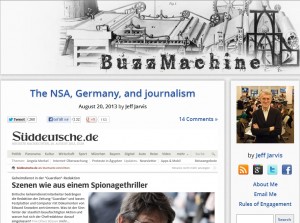 Quelle: wbJeff Jarvis on his blog Buzzmachine takes a look at „The NSA, Germany and journalism“. He’s discussing the difference in media reaction on the recently published Guardian incident, when the UK Government forced the paper to destroy material they had obtained during the Snowden/NSA/GQHC affair. German papers – i.e. Süddeutsche Zeitung und Spiegel-Online and their websites put this on top on August 20th, whereas leading media in the UK (The Times) and US (Washington Post) don’t mention it at all. In addition to Jeff Jarvis, I’d like to add a few considerations here…..

I’m too a bit worried that UK media play low even now, after the Guardian incident. Well, maybe it’s because things happened already 4 weeks ago, so it’s not regarded as ‚real news‘ (Don’t you think, this spread already within the scene, but there was a non-disclosure agreement?). So now the time has come for the Guardian to strike back after Mr. Miranda’s detention. Is revenge that simple? Also this could be part of the usual media game…

What really worries me is, that an incident like that apparently does not seem to be regarded as assault on ‚freedom of the press‘ in the UK, provoking any public outcry. Hey! Didn’t you blokes in the UK sort of invent the ‚public society in coffee houses and the newspapers‘ some 300 years ago?

@Radiomike argued, that the picture Jeff Jarvis delivers on ‚uprising Germans‘ seems exaggerated. But ‚a few thousand people‘ as German International Broadcaster DW reports are not to be underestimated for German conditions of public protest in recent years. By the way: Where is ‚La Grande Nation‘ in this story? Oh, yes. As times are still hard, it’s better to envision France 3.0 in 2025.

True, that the discussion in Germany is mainly fired by the leading media: Spiegel, SZ, FAZ, ZEIT….and ARD/ZDF. So it is first and foremost a media battle. And there is complain about, that the majority of people don’t seem to care or even worry about what’s going on. On the same day, Monday 20th, Sascha Lobo once in his Spiegel Online Blog sounded off on that.

In addition to Jeff Jarvis‘ quoted special ‚political history‘ in Germany – Nazis and Stasi – that provides the background for behaving presently really concerned, you have to mention, that some of Germany’s papers do have their own experience with intruding ’state power‘: Spiegel 1962, Cicero 2005, Berliner Morgenpost 2012….Ever since any assault on the press gets an immediate reflex.

Two more points to mention. First: It’s election time in Germany – so the whole Snowden-NSA-GCHQ complex is also (unfortunately) exposed to the rules of this game: What does the German government know? Or deny knowing? Who’s leading the discussion? Who’s selling best?

Secondly – and most of all: Germans can consider themselves as ‚victims‘. Two of their formerly closest friends spied them. So why the hell media in the US and the UK should drill on what „Grundrechte‘ (fundamental rights) of the German ‚Grundgesetz‘ have been violated? (you might call it constitution in English, but in fact it’s deliberately not called „Verfassung“ but „fundamental law“ for historic reasons)

Indeed unsettling, that use or abuse of technology causes, that once common values of democratic societies develope in different directions …