Picture yourself back or at least try to imagine the progressive spirit at the beginning of the 1970’s. Wasn’t it a modernistic, sheer futuristic era? The interior design of offices and flats seemed to come straight from the set designers of Kubrick’s 2001. Television had switched to colour – just in time to capture the motley fashion, dominated by joyful combinations of yellow, orange and brown. Stereo had become widespread on records and broadcasting. Yet, the listeners of this post flower power, back to consciousness but no limits space age were open to experience new experimental sounds. Listen to Pink Floyd’s The dark side of the moon and you’ll certainly understand the Zeitgeist.

Quadrophony had been introduced by recording companies to offer a spatial sound experience at home. The idea being, to move the concert hall or performing area from the studio into the living room, with the listener amidst.

Bring the listener’s ears to the performance

Meanwhile a few engineers at Berlin’s Heinrich-Hertz-Institute and the Physical Institute in Göttingen thought the other way round: Let’s bring the ear of the listener to the performance. In 1968, Ralf Kürer, Georg Plenge and Henning Wilkens had started to develop a dummy head, first made out of plaster later plastics, were the membranes of two microphones were positioned exactly on spot were natural humans have their eardrum. The principles of recording binaural or more precisely in head related stereo were known long before, but until then only used for acoustic measurements.

The dummy head microphones received open ears, when presented to sound engineers of German broadcasters. The new invention appeared to be a perfect answer to the quadrophonic ambitions of the record industry. Although quadrophonic sound deployment on vinyl records had to pass the same bottle neck of only two channels by using an analogue matrix encoding, broadcasters were reluctant to invest in and expand technical infrastructure for moving on to quadrophonic production (yet, in the course of plans to do so, the BBC introduced Matrix H as an analogue encode-decode technology – a system very similar to the later widespread Dolby ProLogic).

A perfect piece with an ideal plot to be transferred into the virtual sound scape of dummy head stereo. It was adapted from the science fiction novel The demolished man of American author Alfred Bester (1913-1987), published in 1953. The novel “…is a police procedural that takes place in a future world in which telepathy is relatively common” (Wikipedia). One of the important and for the radio adaption certainly crucial aspects centres around a special ‘jingle’, an earwig, that protagonist Ben Reich, keeps in his head in order to lock out any one, trying to peep into his mind, where he bears murderous ambitions…..

In the realisation of the play, the sound engineers pulled all registers, designed fascinating sound spaces – from deceptively realistic to unsettling claustrophobic. Thus this first production is still to be considered a true milestone today.

The play was first aired during the Funkausstellung Berlin (IFA), early in September 1973, and received wide recognition in the media and public, for artistic and technical achievements. Within the following 10 years, numerous dummy head stereo radio plays were produced. An estimated more than 100 productions are kept in the archives of German public broadcasters. The technology was also applied for documentaries focussing on physiological and psychological aspects of hearing, Like Ekkehard Kühns “The ear in the year 200” (“Das Ohr im Jahr 2000”, BR 1981). And former head of BR’s radio drama department Hansjörg Schmitthenner travelled around the world with a dummy head after his retirement, collecting sounds for his monumental “Listen to the world” production (“Welthören”, HR 1990 also issued as CD). 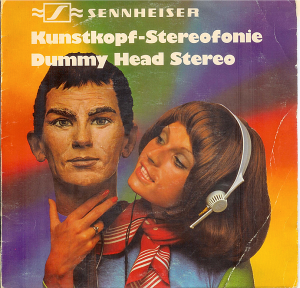 Starting at IFA 1973, dummy head stereo was promoted as the one of the new and upcoming trends for home entertainment. Headphone and microphone manufacturer Sennheiser published a bilingual 45’s single, providing an imaginative listening experience of being guest in a typical German living room. Unexpected, this demo became a bestseller, selling more than 25.000 copies within a few weeks. Today, copies still run for 20 €’s plus on Ebay.

German broadcaster engineers also explored the usability of dummy head stereo for music production. So for classical music parallel with regular stereo dummy head versions were made. In concert halls the dummy head was put either right behind the conductor’s head or positioned at the best places, usually somewhere in rows 5 to 6 middle. Although the original dummy head idea of ‚bringing the listener’s ears to the venue‘ would strike especially for the concert situation, previous made real life experience in many cases prevents appreciation. We are used to, and maybe a little too much aware of the fact that the orchestra has to play right befor our eyes. Yet the lack of immediate and indubitable front detection has always been one of the most argued deficiencies of binaural until now.The 70’s dummy head pioneers were aware of that and suspected the reasons, but neither neuro science then could give any detailed analysis, nor could audio technology deliver any advanced solutions.

Although broadcasters made great efforts in explaining the new technology and giving ‚listening aids‘, dummy head stereo could only establish itself in radio drama and feature production, there becoming a acknowledged dramatic tool. Whereas in clasical music production, apparently no artist or conductor ever approved the dummy head version of any of his productions for broadcast release.

On the commercial sector, there did appear quite a few classical music productions by specialized labels. Not to mention that the big names of the pop avantgarde did record or at least partially use dummy head audio: Prink Floyd, Alan Parsons, Lou Reed, Godley & Creme, Edgar Froese, Can….(The German Wikipedia article on Kunstkopf lists the most famous ones).

During the 80’s the interest went asleep. Other issues in audio production popped up in broadcast production: Multi microphoning and multitrack recording superseded direct to stereo mixing, and the shift to digital audio production – due to the introduction of the CD – were the dominating issues.

Looking back it seems odd, yet a sheer pity, that the introduction of the Walkman did not arrive in time to push forward dummy head stereo. As we know today, Sony did not just create a million selle,r but revolutionized the way of audio perception in 1979, when they threw out this must-have-gadget. And laid fundaments to what we call today “personal audio”: a mobile and ubiquitous, direct-to-ear listening experience, isolated from any disturbing external surroundings. This sort of sound diving could in fact serve as perfect precondition for an ultimate head related stereophonic experience. But unfortunately both trends never came in sync.

New push from digitization and surround

Mixing in 5.1 surround faces the need for specially equipped and designed control rooms. But nowadays quite often productions of classical music no longer are made in classical studios but are caught as live concerts. Mainly of course to limit costs and gain synergies. Yet, even the classical concert hall is not second best anymore, as artists and program makers start to discover other interesting venues with better acoustics or simply for its appeal. As there are no control rooms out there and sound engineers often end up in vestries or other adjoining rooms, solutions to bring the engineer’s ears on location into the control room were developed. So today it becomes more an more common practice for sound engineers to bring along optimized and often even personalized listening situations via headphones. Or let’s put it this way: Sound engineers can now bring their ears into an optimized listening room. So anything playback situation can now be turned into virtual head related binaural.

As the basics of this technology derive from the development of spatial audio object coding (SOAC) within the MPEG4 standard, Fraunhofer IIS in Erlangen added a mp3D function to portefolio of mp3 decoders. Their freely available demo version of the mp3 Surround player comes along with a comparativly simple, yet already impressing 3D function for headphone listening, offering 4 different modes (reffering to head and ear shapes) to choose from. And there yet are promising, but no publicly available implementations into different mobile devices on Android an iOS.

Even the problem of playing binaural via loudspeakers is about to be solved. Crosstalk cancellation filters can deliver dequate perception on the sweet spot. And the next step, to build this into loudspeaker arrays or soundbars presently see the first product implementations by high end manufacturers.

Very exiting seems that through this technology, different sound formats for different listening conditions can be provided through only one encode-decode process: discrete multichannel audio for stationary listening at home or in cars – virtual spatial audio on mobile devices.

From comeback to discovery

A few years ago, BBC’s R&D department started to re-explore binaural. One of the first results was, when in 2011 the traditional The Festival of Nine Lessons and Carols broadcast from King’s College Chapel in Cambridge on Radio3 was also offered in 6 binaural versions on their website, so listeners were able to try out which of them (depending on variation of the head parameters) delivers individually the best virtual experience – and of course to comment and discuss this issue. Shorly after that, in March 2012 the Radio4 drama Private Peaceful was made available in both multichannel surround and binaural for download. And BBC Radio1’s 3D headphone special on the Rob Da Bank show on March 1st 2013 is be considered the first attempt to present the binaural listening experience on popular mass program.

Also in spring 2013 Radio France launched the website nouvoson.radiofrance.fr with an ever increasing number of interesting surround productions in different formats to choose from.

Today music has become a ubiquitous mobile commodity. Initially it was the iPod as successor of the Walkman. Today mobile and smartphones, combing all ways access audio – local, broadcat and IP based – have taken over and changed listening habits. Just consider Apple’s ITunes store has sold more than 25 billion songs worldwide since its start 10 years ago.

And watch these figures: 11 million headphones were sold in Germany in 2012. In 2008 it was 8 million. Since then year by year it became 1 million more. The average price for every pair is 30 Euros and also increasing (market research byGFK for the Germen consumer electronics association gfu)

Set into relations with the 4 million mp3 players and 18 million smartphones sold last year, you can estimate, that every second poem headphone set gets replaced for reasons either they got lost or you want to have better ones (them being used for home equipment is obviously quite unlikely).

Not to mention, that it’s a most exiting listening experience…